What is Model UN?

What is Model United Nations?

Imagine the scene: a delegate from a western democracy rushes down a crowded hall at United Nations headquarters in New York. As she jogs, she fishes through her brief case for a sealed stack of papers. They are important documents: as a representative of her country to the World Food Programme, the delegate has been tasked with brokering a deal to fund a hunger relief mission in a war-torn nation. The resolution she has drafted could spell survival for hundreds of thousands of refugees – but first it must clear several negotiating hurdles from opposing nations.
As the delegate reaches the antechamber, she spots allied representatives from a couple of Eastern states. They convene an impromptu workshop right in the hallway, tightening up some language in the perambulatory clauses and adjusting the funding mechanisms. The delegates also discuss debate strategy – because the rules of procedure are strict, they will have to plan their speaking time carefully to address the concerns of every delegate who may be on the fence.

As the delegate’s turn to speak approaches, she climbs the stairs to the dais. Hundreds of translators wait unseen in the wings of the chamber, preparing to parse her words into the native languages of every member nation. Members of the press from media outlets all over the globe are positioned in the gallery. The eyes of the world are watching. The delegate begins her speech.

This scenario is a brief glimpse into the the world of Model United Nations (or “MUN” – pronounced “munh”), a special kind of debate competition that places students into the shoes of the global negotiators whose policy decisions effect everything from armed conflict and nuclear weaponry to economic sanctions and trade agreements.

MUN is a geopolitical simulation where students are assigned a role as a delegate of a given country and are tasked with representing that country’s positions and arguments on a topic of global importance.

Model Congress is MUN’s close cousin, designed to simulate the US Congress instead of the United Nations. 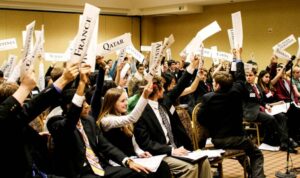 Though the rules of debate are similar, the outcomes are slightly different – instead of passing non-binding resolutions, Model Congress students pass mock legislation that affords an even greater amount of power and authority. They also tackle especially timely issues ripped straight from the headlines of POLITICO and The Washington post.

In both Model UN and Model Congress, students from across the country and around the world convene to discuss and solve some of today’s most pressing issues. There are Model UN and Model Congress students for both high school and college students. Many high school-level competitions are produced by college students, who research the topics, produce the simulations and moderate debate.

Model UN conferences can last for one afternoon or an entire weekend. The larger high school conferences often go from Thursday to Sunday and draw thousands of students from all over the world.

In each committee at a conference, delegates debate issues from the provisional agenda and represent the ideas and motives of nations from around the world. Through the art of international diplomacy and compromise, delegates formulate multinational resolutions designed to ameliorate the issue at hand. Delegates work to amend and pass resolutions through their own committees and have the chance of being heard before the entire General Assembly of the United Nations. In our Specialized and Advanced Committees, such as the Security Council and International Monetary Fund, delegates follow modified UN rules to ensure international peace and security and to grant loan applications. 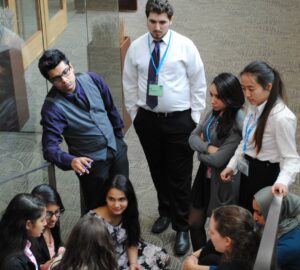 Preparation is vital to an enjoyable conference experience.  Students who research their topics and develop thoughtful and realistic solutions to today’s most pressing issues will be better prepared to adequately participate at the conference.  In addition to developing an in-depth understanding of the issues under discussion, students should also be able to formulate ideas and policy stands in the general interests of their nation.

In addition to academic growth, delegates who excel in their committee sessions are recognized at the closing ceremony for their efforts. But these aren’t your typical debate trophies (actually, they aren’t trophies at all – they’re gavels!) Awards are presented to students who take an active role in the activities of their committee, who show exemplary preparation for the conference, and who best facilitate the work of the committee. In Model UN and Model Congress, compromise skills and not just debating chops are the way to win.